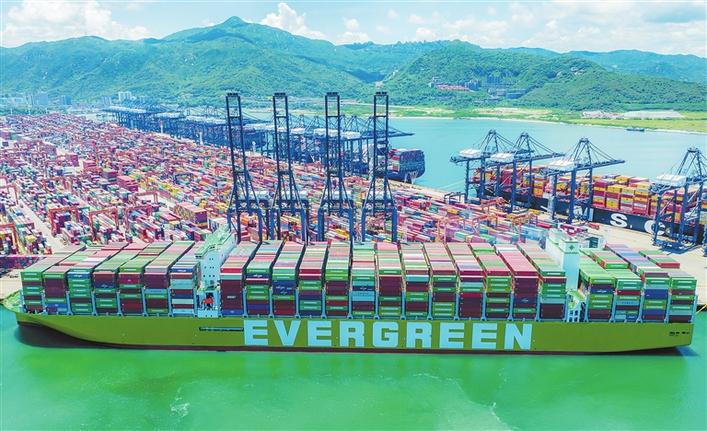 Ever Alot, the world’s largest container ship and the first of its kind built by China, lies at anchor in Yantian International Container Terminals (YICT). The vessel called at the port July 8. Courtesy of YICT

Shenzhen Port handled nearly 13.7 million TEUs (twenty-foot equivalent units) in the first half of the year (H1), up by 6.4% year on year, data from Shenzhen Customs showed yesterday.

Between January and June, Shenzhen Port, including Yantian International Container Terminals (YICT) in the east, and Dachan, Shekou and Chiwan ports in the west, opened six routes with other Pearl River Delta cities’ ports, where freights could be directly shipped to Shenzhen Port for export without necessarily going through customs for secondary checks under the Combined Port program.

So far, under the program, Shenzhen Port has opened 21 routes, saving time and costs for enterprises. The port handled 111,000 TEUs under the program from January to June, 5.2 times that of the same period last year.

YICT, as one of the world’s busiest container ports, recently has completed upgrading its berths, which can now simultaneously accommodate six 200,000-ton container vessels.

According to Cen Qicheng, managing director of YICT, the company will operate more than 100 routes a week for global trade.

On July 8, Ever Alot, the world’s largest container ship and the first of its kind built by China, called at YICT. It was designed by Hudong-Zhonghua Shipbuilding (Group) Co. Ltd., a subsidiary of China State Shipbuilding Corp., with complete independent intellectual property rights.

The ship is 399.99 meters long, over 60 meters longer than the world’s largest aircraft carrier, and 61.5 meters wide. It has a 24,000-square-meter deck area, equivalent to 3.5 standard soccer fields.

Containers can be stacked to a maximum height equivalent to a 22-story building.

The giant ship has snatched the world’s largest container ship record from Ever Ace, another Evergreen-flagged vessel.

The vessel also features energy-saving designs. The shipbuilder has adopted the latest hydrodynamic optimization technologies, allowing the vessel to carry heavy loads at high speed with low fuel consumption. It serves the routes between the Far East and Europe.

Ranked the world’s fourth-largest port in container throughput in 2021 and China’s third-biggest one, the Shenzhen Port is the collective name used for several ports along parts of the city’s coastline.

It is home to 39 shipping companies that have launched over 130 international container routes, according to the Journal of Commerce.

According to the 14th Five-Year Plan released by the city’s transportation bureau last year, the container throughput of Shenzhen Port will reach 33 million TEUs by 2025, growing from 28.77 million TEUs in 2021.