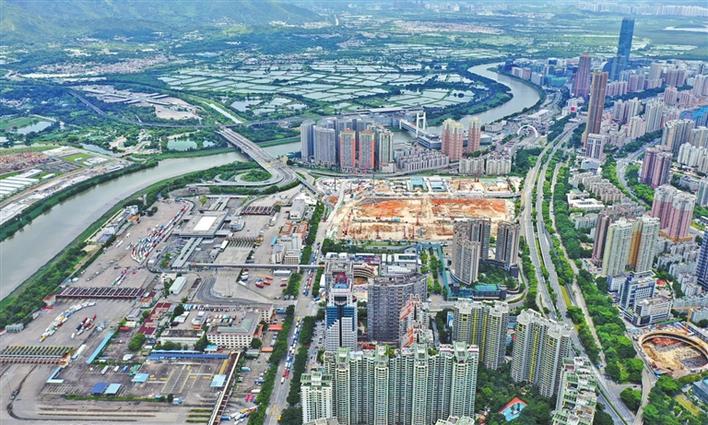 Twenty-five years after Hong Kong’s return to the motherland, Shenzhen and Hong Kong have been brought much closer by the continous upgrading of border checkpoints and the transportation network. Convenient customs clearance and efficient transport systems have helped Hong Kong further integrate into the Guangdong-Hong Kong-Macao Greater Bay Area (GBA) and shore up the coordinated develpment in the GBA.

Checkpoints have served as an important link between Shenzhen and Hong Kong, and have witnessed the development and prosperity of the two megacities in the past decades. To further support integrated development in the GBA, Shenzhen is currently accelerating the construction and renovation of its checkpoints, such as Luohu, Liantang and Huanggang checkpoints.

On July 1, Luohu Checkpoint will celebrate its 72nd anniversary. A railway bridge was put into use at the checkpoint in the 1950s.

For the 25th anniversary of Hong Kong’s return to the motherland, Luohu Checkpoint will continue the two cities’ stories by upgrading itself into a modern transport hub that integrates high-speed railways, intercity railways and Metro lines.

In May, the Office of Port of Entry and Exit of the Shenzhen Municipal Government unveiled Luohu Checkpoint’s reconstruction plan and overall layout report. According to the plan, Luohu will extend Metro Line 11 to the station and will reserve its function to further connect with Hong Kong’s East Rail Line. After the upgrades, it will take about 65 minutes to reach Guangzhou CBD and 45 minutes to reach Central in Hong Kong from Luohu.

On Aug. 24 this year, Liantang Checkpoint, the seventh land border-crossing facility between Shenzhen and Hong Kong, will celebrate its second anniversary. A structure between Hong Kong’s New Territories and Luohu District, Liantang/Heung Yuen Wai Checkpoint is connected to the Heung Yuen Wai Highway on the Hong Kong side and Shenzhen Eastern Cross-border Expressway and Luosha Road on the Shenzhen side.

The checkpoint has diverted half of the trucks from Wenjindu and Luohu checkpoints by cutting the travel time between Hong Kong and the eastern part of Shenzhen such as Pingshan and Longgang to around 30 minutes.

Reconstruction of Huanggang Checkpoint, another land border with Hong Kong, is under way. The reconstruction work officially started two years ago, and the new facility will have about 400,000 square meters in floor area and can handle 200,000 cross-border travelers a day. During peak days, it can handle some 300,000 people a day.

Both Shenzhen and Hong Kong authorities attach great importance to transport infrastructure, which plays a vital role in the GBA integration.

Earlier in May, Hong Kong’s East Rail Line, which is seamlessly connected with Shenzhen Metro lines 1 and 4 via Luohu (Lowu) and Futian (Lok Ma Chau) checkpoints, commenced its cross-harbor extension service, enabling travelers from Shenzhen to reach the commercial, convention, exhibition and financial hubs in the Wan Chai North and Admiralty areas without having to interchange in Hung Hom Station.

Hong Kong Chief Executive Carrie Lam said at the extension line’s opening ceremony that the line will directly link the Harbor Metropolis and the Northern Metropolis, which is now under planning and construction. In the long run, it will further promote integration between Shenzhen and Hong Kong.

The Qianhai-Huanggang Checkpoint section of the Guangzhou-Dongguan-Shenzhen Intercity Rail runs 21.1 kilometers, passing Nanshan and Futian districts, according to the plan. It has two stations, respectively at Shenzhen Bay Super Headquarters Base in Nanshan District and Huanggang Checkpoint in Futian District. The two stations will be connected to Metro lines and other intercity rails to form comprehensive transport hubs.

By 2025, according to the GBA intercity railway construction plan issued by the Guangdong Provincial Development and Reform Commission, the GBA’s railway network, both in operation and under construction, will reach 4,700 kilometers, covering central and key cities. The GBA cities in Guangdong will connect with Hong Kong through the Guangzhou-Shenzhen-Hong Kong Express Link and Beijing-Kowloon Railway.