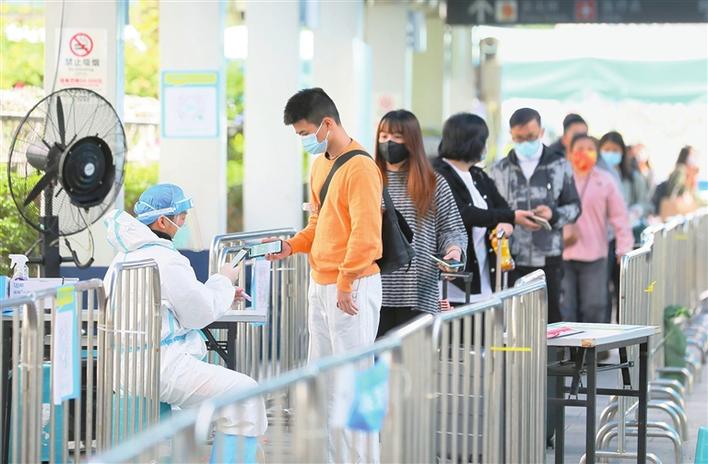 Passengers who arrived in Shenzhen wait in line to take COVID tests at the west square of Shenzhen North Railway Station on Tuesday. Zhang Yanyan

Mobile test labs have been set up at each train station in Shenzhen for arrivals to undergo nucleic acid tests.

Shenzhen’s railway stations will further implement COVID-19 prevention and control requirements, especially during the Qingming Festival transport period, which will be between April 2 and 5.

Shenzhen is now trying its best to further curb the resurgence of COVID cases during the Qingming Festival holiday, or the traditional tomb sweeping holiday. Cemeteries across the city will be closed during the holidays and the city has advocated that mourning activities should be done online.

In another development, Shenzhen Metro network handled 22.1 million passenger trips between March 21 and 27, the first week after the lockdown was lifted, data released by the operator showed Tuesday.

Between March 21 and 27, Metro ridership reached 3.53 million on average during workdays, accounting for 53% of the workday average in 2021. Its daily average on the weekend reached 2.23 million, or 42% of the daily average on weekends in 2021, data showed.

“Metro ridership is picking up. On March 25, it reached 3.84 million trips, up by 28% over March 22,” said a report from Shenzhen Metro Group. When southern Futian lifted its lockdown Monday, ridership reached 4.548 million trips that day, a new record in the past month, reaching around 70% of the normal workday average.