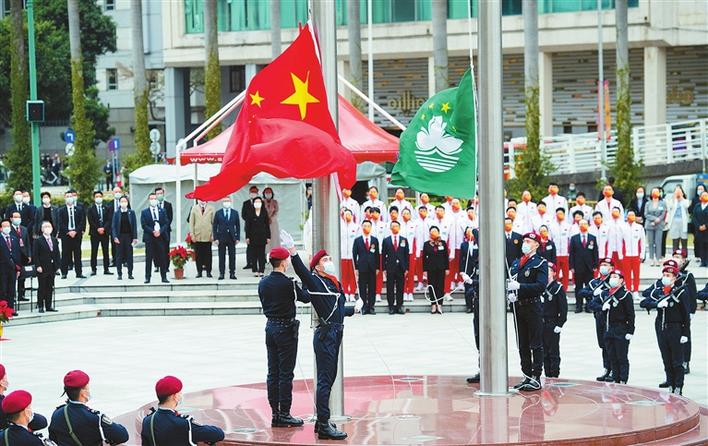 A flag-raising ceremony is held in Macao yesterday to mark the 22nd anniversary of its return to the motherland and the establishment of the Macao Special Administrative Region.

The Macao Special Administrative Region (SAR) yesterday held a flag-raising ceremony and a reception to mark the 22nd anniversary of Macao’s return to the motherland and the establishment of the Macao SAR.

Ho Iat Seng, chief executive of the Macao SAR, said at the reception that Macao will continue to build and complete legal systems and enforcement mechanisms safeguarding national security so as to ensure its long-term prosperity and stability.

The Macao SAR Government will effectively implement the targets and tasks set in the policy address for 2022 and its second five-year plan (2021-2025), promoting steady economic recovery while consolidating epidemic control, speeding up appropriate economic diversification and better integrating into the country’s overall development, Ho said.

He also pledged continuous efforts to optimize work related to people’s livelihood and advance the building of the Guangdong-Macao in-depth cooperation zone in Hengqin, Zhuhai City, which is just across Macao on the mainland.

Over 900 guests attended the reception, including Ho Hau Wah, vice chairman of the National Committee of the Chinese People’s Political Consultative Conference, Fu Ziying, director of the Liaison Office of the Central People’s Government in the Macao SAR, and Liu Xianfa, commissioner of China’s Ministry of Foreign Affairs in the Macao SAR.

Prior to the reception, a flag-raising ceremony was held at the Golden Lotus Square. The delegation of the mainland Olympians, who are in Macao for a three-day visit, also attended the ceremony.

“I’m very proud to be here to celebrate the anniversary together with our Macao compatriots,” said table tennis Grand Slam winner Ma Long. “It means a lot to me.”