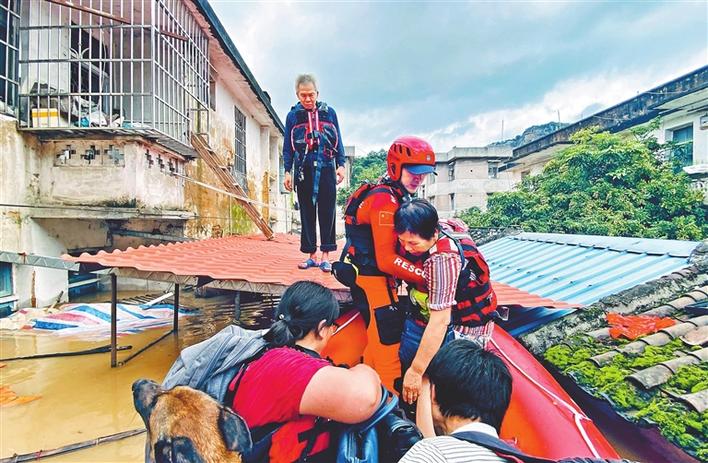 Shenzhen Rescue Volunteers Federation has dispatched 36 rescuers in two batches to Yingde in the city of Qingyuan in northwestern Guangdong, which was hit hard by worst rains in decades.

Equipped with rescue boats, satellite phones and 500 items for water rescue, medications, and other supplies, the first 21-member team joined the rescue at Yinghong Township at 4 a.m. Wednesday.

“On the first day, the team rescued 66 people, including 42 elderly people, one pregnant woman, nine children and four people who needed medical attention,” Wu Binlin, a team member, said at an interview Thursday.

The team, hampered by a blackout and communications disruptions, set up a relay station at the rooftop of the township government building to coordinate operations in different regions.

The second team, consisting of 15 members, arrived at Yinghong Township on Thursday morning. Some of them were sent to Lianjiangkou Township, which is Yinghong’s downstream and faced worse situation.

A Shenzhen resident surnamed Qiu, a Yingde native, was worried about her brother she lost contact with. Qiu’s brother who lived in the flood-hit Hanguang Township was responsible for relocating villagers from low-lying areas to safer grounds.

“His phone is off and the signal is poor. I have lost contact with him since Wednesday noon.”

In the past week, persistent heavy rains continued to batter Guangdong, swelling rivers, triggering landslides and prompting the evacuation of residents, with the cities of Shaoguan and Qingyuan hit the hardest.

Water resources departments across the province had sent more than 6,500 working teams as of Wednesday.

“The flood in Yingde is receding and water supply is gradually restored,” Liu Jingtao, an official with Yingde’s rural development bureau, said at an interview Thursday. “The situation in townships is worse than urban areas, and some villages still have no water or electricity.”

Government departments in Yingde were ordered Thursday to maintain high vigilance against geological and natural disasters after the flood crest of the Beijiang River passed the city.

“The flood crest of the Beijiang has passed the city, but it remains at a high level and the flow is still large, threatening the lives and property of local residents,” the Yingde government said in a statement.

Water in the Beijiang, a tributary of the Pearl River, is receding slowly after the flood crest passed at 2 p.m. Wednesday.

The flood crest of the river, which runs through the city’s downtown area, reached as high as 35.97 meters, 9.97 meters above the warning line and the highest since 1951, the statement said.

Authorities said people’s lives should be put first, with particular attention paid to possible outbreaks of post-disaster epidemics and efforts to organize residents to restore production and rebuild their homes.

Catastrophic flooding that happens once in 50 years has resulted in widespread of economic losses and the evacuation of many local residents in Yingde, under the administration of Qingyuan City, known as a back garden of Guangzhou, Guangdong, the statement said.

Data from Yingde Agriculture and Rural Affairs Bureau showed the flood had affected around 400,000 people and caused around 155 million yuan (US$23 million) in direct economic loss.