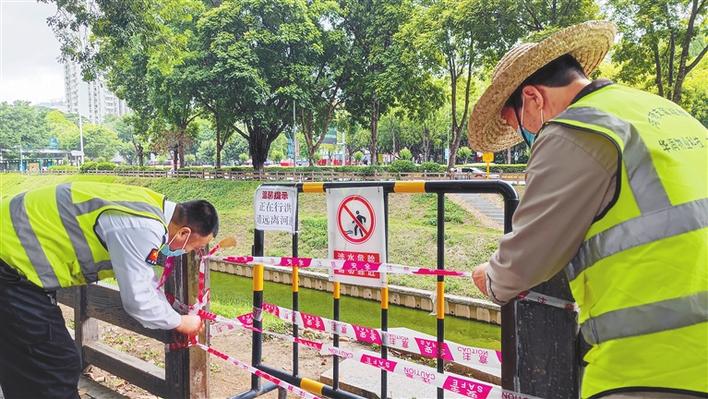 Staffers reinforce a railing for saftey on the bank of the Xinzhou River in Futian District yesterday as the city braces for this year’s heaviest rain. Sun Yuchen

The city will ensure emergency rescuers, equipment and materials in place at the frontline, and flood control officials and staffers will work 24-hour shifts to eliminate safety hazards, as the city braces for possibly the heaviest torrential rains this year, which will last from today to Sunday, Shenzhen Party chief Meng Fanli said at a video government meeting yesterday.

Precision monitoring and warning should be enhanced with the help of big data and AI technologies, he said.

The meteorological observatory issued a thunderstorm warning for the whole city at 6 p.m. yesterday. It said orange or red alerts for rainstorms are expected to be issued tomorrow and Friday.

The local flood control headquarters said yesterday it has directed 45,000 registered staffers responsible for managing the risk of flooding across the city to remain vigilant and monitor the situation closely.

The Wutong Mountain scenic spot and Futian Mangrove Ecological Park announced yesterday that they will be closed to the public from today to Sunday.

The heaviest rains are most likely to pour from late night to morning from today to Friday during this round of heavy rain in Shenzhen, according to the meteorological body.

Local transport authority estimated that people might spend around 7% more time on their commute than usual during morning rush hours.

At the same time, heavier traffic is expected on roads in subdistricts including Dongmen in Luohu District, Taoyuan and Yuehai in Nanshan District, Yuanling in Futian District and Minzhi in Longhua District during the morning commute.

There are 182 spots most prone to waterlogging, with the most in Longgang District, which is followed by Futian, according to the authority.

In case of continuous heavy rains, citizens are advised not to go out unless absolutely necessary. Drivers must avoid traveling on flooded roads and get out of the car when it breaks down in a low-lying area.

During thunderstorms, people should not work in the fields and must stay away from high-voltage power lines, isolated tall buildings, big trees and flag poles. People should not stand in the open high ground or under large trees to take shelter from rains and use phones on top of a high mountain, according to experts.

According to local education authorities, when an orange alert for rainstorms is issued or becomes effective between 6:30 a.m. and 8 a.m., parents can wait for the rains to let up and notify schools of their children’s late arrival.

When a red alert for rainstorms comes to effect or is issued from 6:30 a.m. to 8 a.m., school will be suspended.

The National Meteorological Center on Monday renewed a blue alert for rainstorms, the fourth level in the country’s five-tier system, in provinces and municipalities including Chongqing, Guizhou, Hunan, Jiangxi, Guangxi, Guangdong and Yunnan.