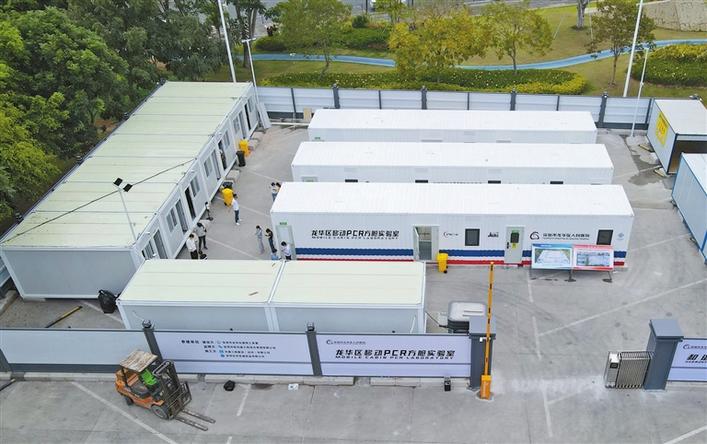 The Longhua mobile PCR laboratory was put into operation in the northwest part of Shenzhen North Railway Station, a major transport hub in South China, on Wednesday. Samples collected from arriving passengers are sent to this lab for tests. It can handle up to 60,000 nucleic acid test samples and 4,000 rapid tests a day. For regular tests, results could be released in six hours; and for rapid tests, the results could be available within two hours.

The lab covers 915 square meters and has three standard chambers — one for reagent storage, one for sample preparation and one for sample testing. It is equipped with 27 PCR equipment for regular tests, eight rapid test equipment and six automated nucleic acid extractors.

The lab at Futian Railway Station, which was also put into operation Wednesday, can test 10,000 tubes of samples to its full capacity a day. If a mixed test method, 10 in one, is adopted, the lab can complete tests of 100,000 samples for arriving passengers a day.

The mobile lab at Pingshan High-speed Railway Station is the first mobile PCR lab in Pingshan District. It can handle 15,000 samples a day and results could be released in one hour.

Meanwhile, after a five-day construction, the lab at Shenzhen West Railway Station was put into use Wednesday. It can provide test results in 90 minutes.