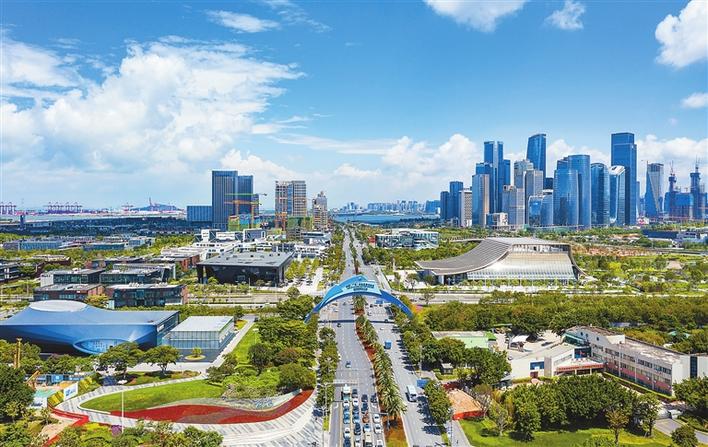 Qianhai strives to prove itself as a highlight in the construction of the Guangdong-Hong Kong-Macao Greater Bay Area (GBA) and an ideal option for Hong Kong investors as its main economic indicators continue to surge in the first half of 2021, despite the ongoing pandemic.

Official data released ahead of the Qianhai Shenzhen-Hong Kong Modern Service Industry Cooperation Zone’s 11th anniversary shows Qianhai achieved a 22.1 percent increase in tax revenue in the first half of the year and a 29.9 percent increase in export and import, reaching more than 650.6 billion yuan (US$100.5 billion).

Hong Kong-invested companies make up over 10 percent of registered enterprises making tax contributions in the area.

To better facilitate the development of Hong Kong enterprises and individuals, to lure more Hong Kong youth and professionals seeking opportunities in Qianhai and other places on the mainland, Qianhai has carried out a series of preferential policies and actions for Hong Kong people in the past decade.

In addition to the often-mentioned tax reduction, cash subsidies, rental discounts, Qianhai has lowered its threshold for the service industry, allowing Hong Kong companies and professionals in construction, accounting, tax and law practices to directly work in the area after registration.

By continuing promoting financial innovation, Qianhai has seen Hong Kong- and foreign-invested banks and other financial institutions thrive over the past years.

To secure a better living environment for Hong Kong residents, Qianhai has helped many Hong Kong people transfer their children from Hong Kong schools to schools in Shenzhen, safeguarding their children’s rights to the same education opportunities as their mainland counterparts.

During the construction of the GBA, Qianhai is expected to reinforce its role as an area for deeper legal cooperation, as a key engine of cross-border cooperation and a new international city-center for Shenzhen. Qianhai is, first and foremost, a demonstration area for Shenzhen-Hong Kong cooperation.