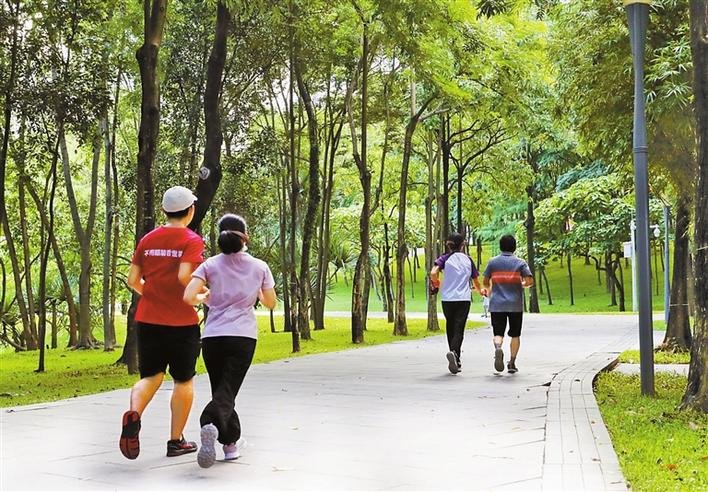 Two pairs, each composed of a guide runner and a visually impaired runner, run in tandem Sunday morning. Zheng Zhipeng 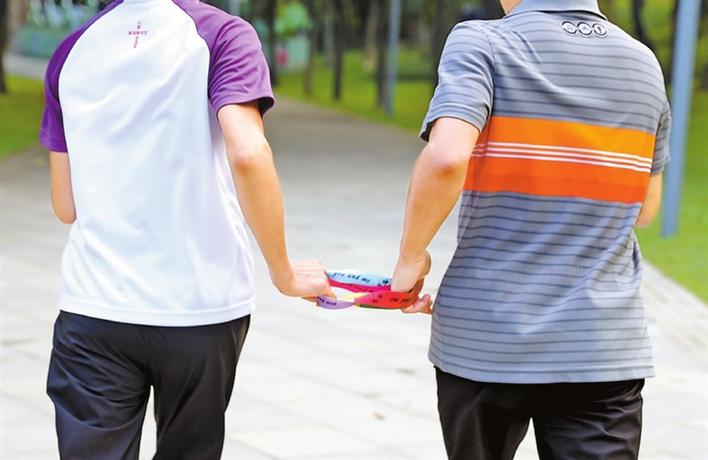 A pair of runners run side by side, connected by a tether.

At 7:30 a.m. Sunday, a pair of runners attracted people’s attention at the South Square of Shenzhen Civic Center, Futian District. Using a tether, a guide runner named Guo Yuzhen and a visually impaired runner (VI runner) Wei Xiaoping ran side by side for 3 kilometers.

Both of them are members of Shenzhen U Running Club (深圳U跑团), in which volunteer guide runners aid the visually impaired in running or jogging, Shenzhen Evening News reported.

“The club consists of sighted runners and ones with different levels of vision loss half and half,” said Guo, the chief executive of the group.

For Wei, born in 1998, running has injected a new vitality into her life. As a new U Club member, Wei has regarded Guo as a reliable guide after running with him thrice. “The vision loss has darkened my world. However, running is a door leading to a new life. I set a goal for this year: to finish running 10 kilometers without a break,” Wei said.

Liu Fengjiao and Qu Yixin are members who have been in the club for over five years. Liu, a partially sighted person, sometimes plays a role as Qu’s guide runner. They once participated in the 6-kilometer Shenzhen International Marathon fun run.

The club was established in September 2015 and in that year, a total of 30 Shenzhen VI runners and 157 volunteers took part in the marathon. The group’s members have been frequently joining marathons in the following years. There have been eight runners with vision loss completing full marathons and 13 VI runners completing half marathons.

The club faces a shortage of regular guide runners. “Although we have 150 registered guide and VI runners, the number of guide runners who participate in routine activities is around 20,” said Guo. According to him, sighted guides need to undertake safety training as they put safety first. These guides must often communicate with VI runners and be conscious of hazards and obstacles along the way.

“This interaction is beneficial for both to relax and build mutual trust. Technically, if the guide runner and VI runner are in the same tune thinking and running, it will more likely lead to an excellent experience,” Guo added.

During training, guide runners are encouraged to wear blindfolds to experience running without sight. In races, runners must wear clothing with visible signs “Guide Runner” and “Visually Impaired” on it.

Guo is advocating for more attention and support to the visually impaired, who have the same rights in participating in sports as sighted people.