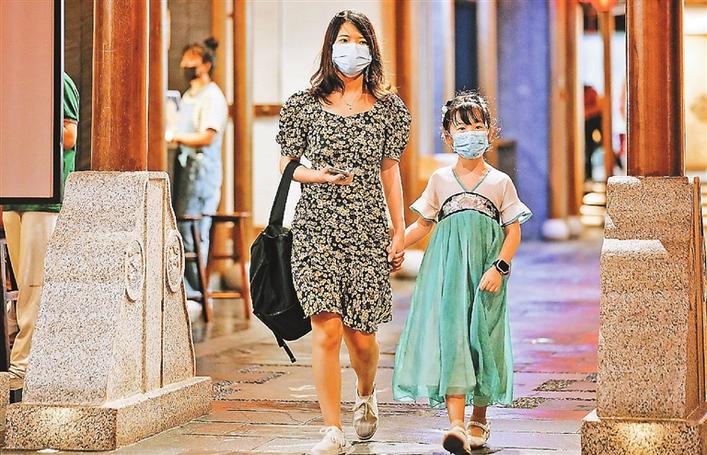 The popularity of Hanfu – traditional Han Chinese clothing – is particularly noticeable in some traditional festivals as the costumes have transformed from a niche hobby to a massive consumer market in China.

According to data from corporate information tracker Tianyancha, Shenzhen is home to 120 Hanfu-related enterprises at present, with the number of these enterprises exceeding 100 last year.

In June 2019, influenced by friends who love Hanfu culture, one citizen, Zhong Meihua became a Hanfu aficionado and opened a Hanfu experience house.

As the first batch of merchants who opened Hanfu experience houses in Shenzhen, Zhong said that Hanfu, which originally existed only in the television and film industry, is gradually appearing in people’s lives. Her Hanfu experience hall has received many customers who are attracted by the exquisite costumes, makeup and props that appear in Chinese ancient dramas.

“They are not looking for the same products, but they want to experience clothes of the same shape and form,” Zhong told the News, adding that Tang and Ming dynasty-style Hanfu are the most popular among customers.

Traditional festivals are the “golden time” for Hanfu rental, according to Zhong. Although students are her main customers, Zhong’s clientele covers a wider range of age groups. “Young people not only experience Hanfu culture themselves, but they also bring their parents to feel its unique charm.”

According to a report from iMedia Research in January this year, it is predicted that the number of Hanfu lovers in China will reach 6.894 million in 2021, and Hanfu market sales will reach 10.16 billion yuan (US$1.56 billion).

According to economic researcher Hu Qimu, Hanfu is not very suitable for daily wear from a practical viewpoint. But as a symbol of cultural identity, it is not only a part of the booming cultural and creative industry in recent years, but also an inheritance of Chinese traditional culture.