Canadian Daniel Dumbrill (L), a company owner, speaks at a symposium at Shekou Management and Service Center for Expats on Thursday. Sun Yuchen 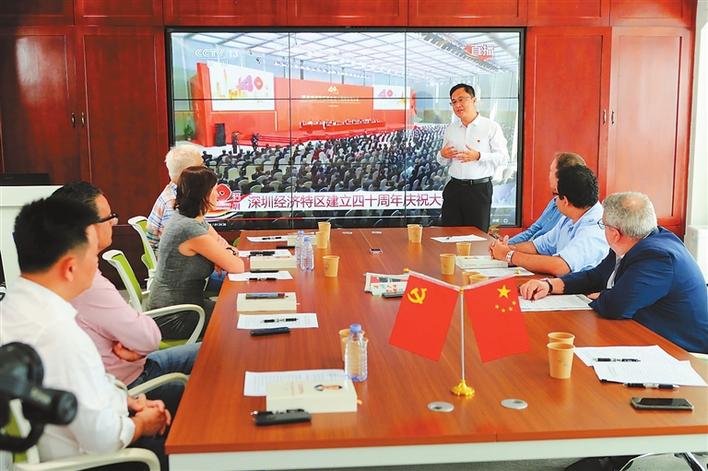 Zhang Lin, director of the city’s talent bureau, speaks to expats attending a symposium that was held one day after a grand gathering celebrating the 40th anniversary of the Shenzhen Special Economic Zone on Wednesday. Sun Yuchen 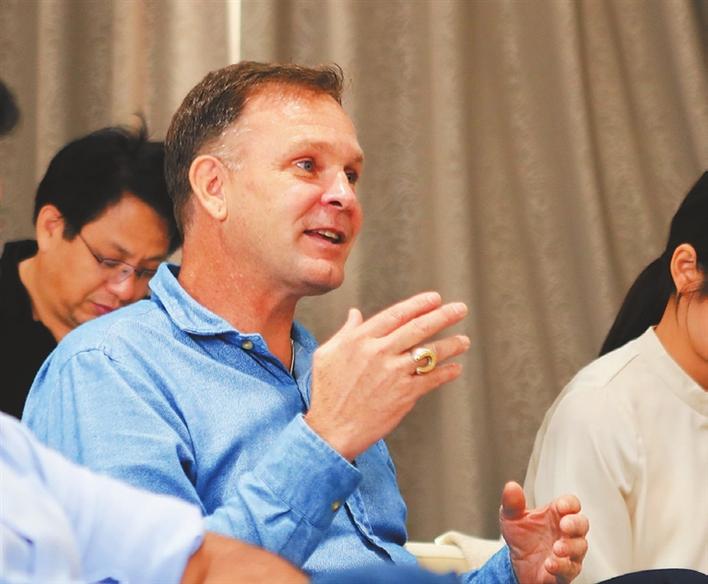 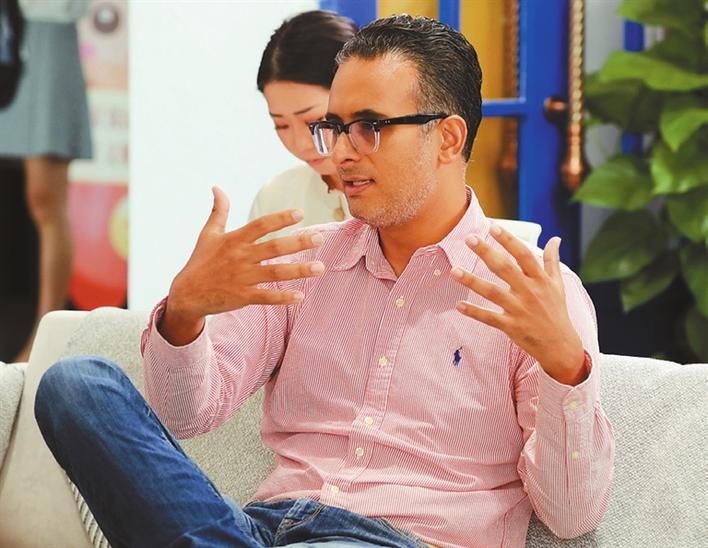 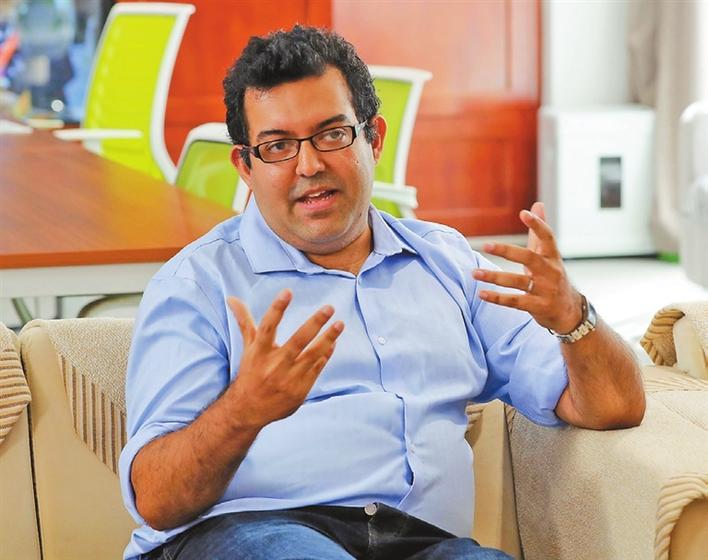 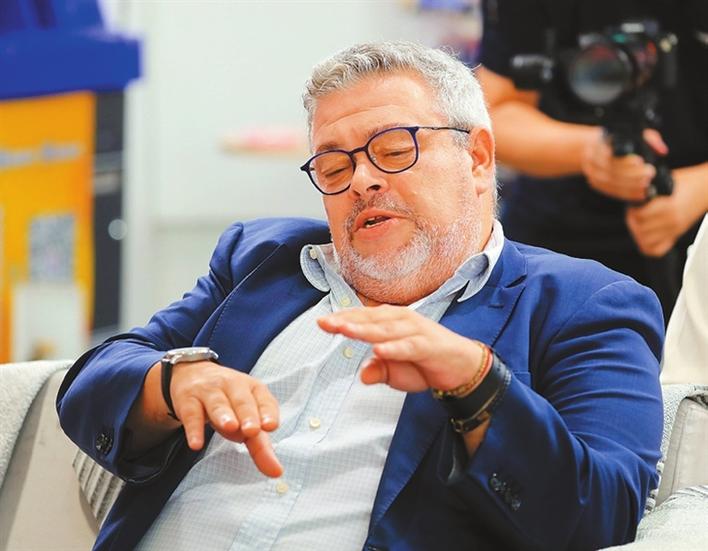 Local expats shared their Shenzhen stories and expressed confidence in the future development of the Shenzhen Special Economic Zone (SEZ) at a symposium at Shekou Management and Service Center for Expats on Thursday.

The symposium was held one day after a grand gathering was held in the city to celebrate the 40th anniversary of the SEZ in Qianhai on Wednesday attended by President Xi Jinping.

Zhang Lin, director with the city’s talent bureau, said at the symposium that he received many phone calls and WeChat messages from foreign professionals asking about Wednesday’s event.

“Seeing is believing. Only those foreigners who come to Shenzhen can realize how amazing the city is,” said Juan Gibert, a Spanish businessman.

Xi stressed solid implementation of a people-centered philosophy of development in the reform and development of SEZs. For Gibert, the establishment of Shekou Service and Management Center for Expats is an example of this idea put into practice.

“For foreigners who are new to the city, the center did a lot helping newcomers to get accustomed to life in the community,” said Gibert.

Gibert, who has engaged in trade of chemicals and raw materials for shoes in Hong Kong for a decade, cares more about China’s investment policies for foreigners.

“China will expand its opening up and make it easier for foreigners to invest. I am confident with my business and Shenzhen’s future development,” he said.

The 53-year-old plans to settle in Shenzhen after retiring and hopes to send his 5-year-old son to a public school instead of an international school. But he wonders what policies Shenzhen offers for retired expats and how expat children can go to a public school.

“Shenzhen, an amazing city with a lot of miracles, needs to promote itself more and tells its stories to the outside of the world,” Aleksandra Kozlowska from Poland said.

As an HR manager in an IT company, she thinks Shenzhen is a dynamic and safe city.

“In Shenzhen, you can solve almost everything with a mobile phone. It is a first-tier city in China, but it is still less well-known to the world than Beijing, Shanghai and Hong Kong,” Kozlowska said. “My friends thought China is polluted, but after five years in Shenzhen, I can tell them that Shenzhen has good landscape and parks and is a city driven by innovation.”

“What is more impressive is I feel safe here. You can go out at night without worrying about safety and as a mother of two, you don’t have to worry about kids’ daily safety.”

With a financial background and working experience at multinationals in Beijing, London and Singapore, Briton Mawaz Imam came to Shenzhen because of his wife’s career. He has great confidence in its future.

Shekou is the home of more than 8,000 expats from more than 100 countries. According to Lan Tao, Party chief of Shekou Subdistrict, many expats, especially those living in Shenzhen on a long-term basis, are keen to know more about the city. The subdistrict will organize more activities to help them blend into the local community.

The following are excerpts from four expats who attended a symposium held in Shekou on Thursday, one day after a grand gathering was held in Shenzhen to celebrate the 40th anniversary of the Shenzhen Special Economic Zone.

from the United States,

I used a translator to listen to President Xi’s speech for the 40th anniversary of the Shenzhen Special Economic Zone and thanks to the translator I could read over and over his important words. This gave me the opportunity to really focus on what I care about. I feel Xi speaks with his heart and cares about the people he leads. He used the words spiritual and spirit many times. He talked about the future and how people have an opportunity to grow the government and add to reforms to make China and the world a better place.

I want to live in this world and I hope others will have the chance to live in a future described by President Xi. If Shenzhen was just a fishing village 40 years ago and now it’s the most modern city I’ve ever been to, then imagine what this city will be in another 40 years. I believe Shenzhen is the future capital of the world and if you had a chance to visit, I believe you might say the same thing.

Shenzhen is a great place that is different from what some Western media have described. I chose to be a volunteer during the COVID-19 period in China because I think we can stop it if we work together and my friends felt that I was very lucky to stay in Shenzhen.

Shenzhen is open, inclusive and inviting.

Shenzhen is one of my favorite cities in the world and I have my YouTube channel to share my life in China. I did this because I thought China is misunderstood and should tell its side of the story better. I want to tell people from all around the world about how great Shenzhen and China is.

Although Shenzhen from a social level is a welcoming city, at the policy level, there are things that could be better. If Shenzhen wants to attract more foreign talent, the policy for applying for a Chinese “green card” should be more convenient.

China should create more pathways for foreigners to become permanent residents to attract more talent by letting them know they can build their life here.

Expert in fintech and investment

I moved back to Shenzhen just two months ago for family and career arrangement of my wife. Having lived in Beijing for nine years, and traveled frequently between China, the U.K. and Singapore, I am very excited to be back again.

It’s been pretty incredible the way Shenzhen has developed. We really do think that the future of China is quite strong. It’s quite bright, particularly from something that really means a lot to us — technology. My wife and I are both in the field. So we really see the way that things are developing in Shenzhen.

I think “progress, aspiration and success” can best describe Shenzhen.

When I settled down in Shenzhen after 12 years in Hong Kong, I was surprised by its changes.

I prefer to use “amazing, perfect and safety” to describe Shenzhen. As for “amazing,” I was impressed by its fast growth. When it comes to “perfect,” Shenzhen is perfecting itself day by day and most of my experience here makes me feel good. There is no need to worry about the safety of children. It is safe enough for kids to play around alone.

About living in Shenzhen, I have two concerns. One is about retirement, because I wasn’t aware of any regulations in this regard for foreigners.

I want my kid to get educated in a local public school because he is so proud of being in China.

The last part I want to say is about the legal framework in China. It is very important for people to understand how the legal system works in China and what the implications are.

Western people hold the perception that China has no clear laws and rules. It is not true. China is more protective of copyright or other legal rights because I worked closely with a law firm in China from a law firm in Spain, and the figures about the law in China are very good.