An online seminar on ASEAN media’s views on digital China was held simultaneously in Shenzhen and Beijing on Wednesday. Government representatives, experts, entrepreneurs and media professionals from China and ASEAN countries shared their views and insights on the development and cooperation prospects of the digital economy and smart cities at the seminar.

This year marks the first year after the formal establishment of a comprehensive strategic partnership between the ASEAN and China, and the Regional Comprehensive Economic Partnership (RCEP) took effect in January.

The seminar, part of the 2022 Media Tour of ASEAN Media’s View on Digital China, was hosted by China Daily and the ASEAN-China Center (ACC), and organized by China Daily Website and Cyberspace Administration of Shenzhen.

He called for further cooperation between China and ASEAN media, enterprises and think tanks, to inject continuous vitality into the development of China-ASEAN digital economy, and high-quality construction of the Digital Silk Road.

From the installation of 5G stations to smart hospitals and a digital currency trial, these are concrete outcomes from the beneficial cooperation between Thailand and China, he said.

Shi Zhongjun, secretary general of ACC, said at the seminar that the digital economies of China and ASEAN countries are highly complementary and there is a solid foundation and huge potential for digital cooperation between the two sides.

"The ACC will continue playing its role as a bridge between ASEAN and China to promote policy communication, expand consensus and deepen cooperation in the digital field, and make new contributions to the growth of ASEAN-China relations," he said. 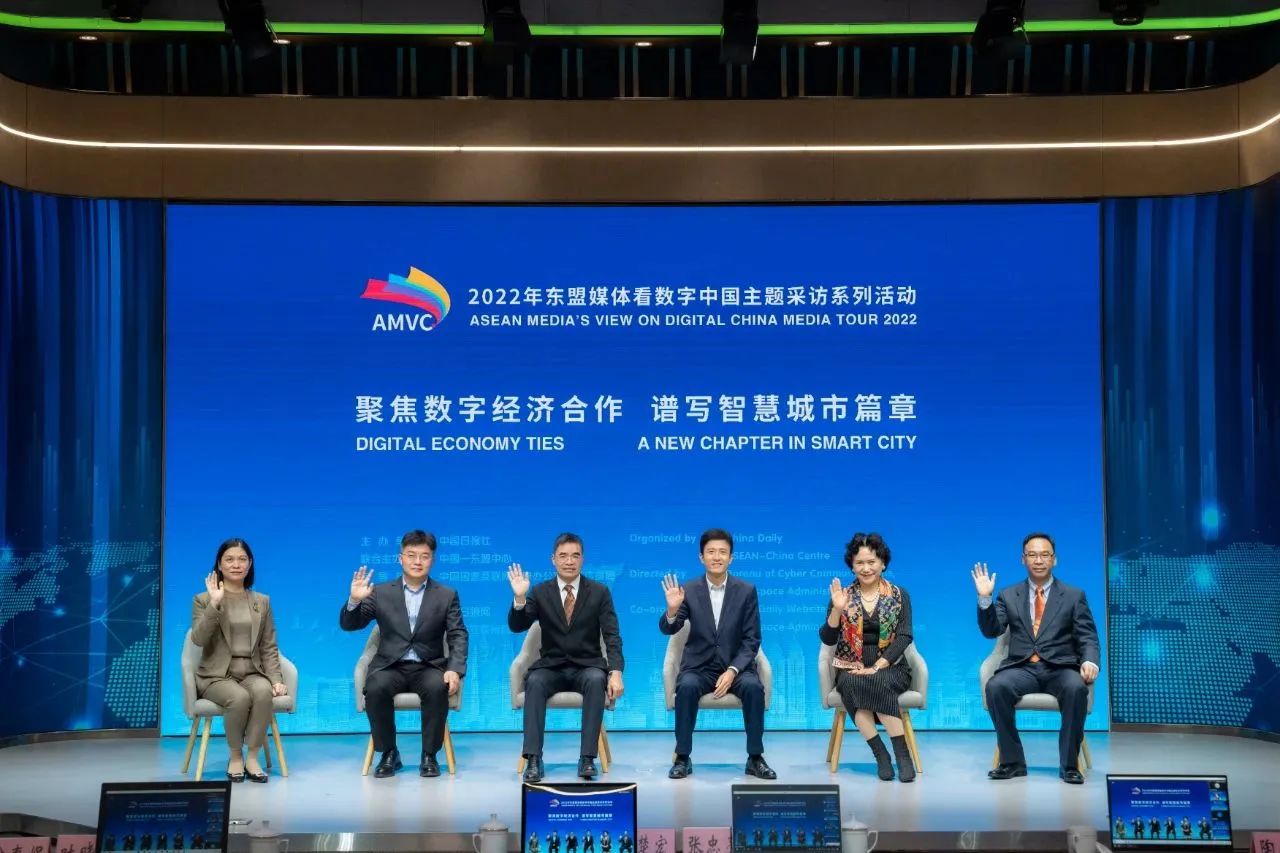 Attendees of a seminar on ASEAN Media’s View on Digital China gesture at a subvenue in Shenzhen on Wednesday. Lin Jianping

Beijing and Shenzhen are among the top five cities in the digital economy, according to the 2022 China Digital Economy Development Research Report.

Shenzhen has been promoting the construction of a smart city and e-government at high standards, according to Wang Chuhong, deputy head of the Publicity Department of the Shenzhen Municipal Committee of the CPC and head of the Cyberspace Administration of Shenzhen. The city will continue to provide strong support and services in multiple aspects including organizational designs, legal services, infrastructure construction and industrial policies, Wang said at the seminar.

The added value of the core industries of Shenzhen’s digital economy last year exceeded 900 billion yuan (US$128.8 billion), accounting for 30.5% of the city's GDP.

As of 2021, Shenzhen had built over 50,000 5G stations. In addition, the city ranks first in the information society index and an online government service capability index, according to related reports released by the national authorities.

Moreover, Shenzhen has cultivated a batch of leading enterprises involved in the digital economy sector such as Huawei, ZTE, Tencent and Ping An.

Huang Runzhong, chief supervisor of One Connect of Ping An Insurance (Group) Co. of China, highlighted new opportunities for digital development and shared the company's effective practices in digitalization.