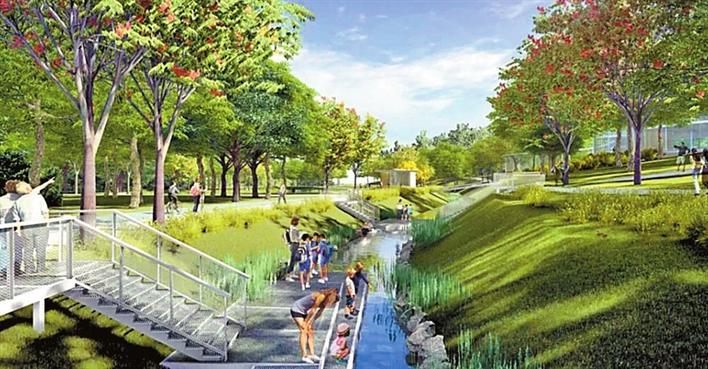 A computer-generated image of a section of the Xili Lake greenway under construction in northern Nanshan District. Shenzhen Evening News

The construction of a demonstration greenway section around the Xili Lake in northern Nanshan District kicked off Tuesday morning.

A greenway refers to a linear route established along rivers, lakes and reservoirs. This open space has multiple functions ranging from ecology, security, culture, landscaping to recreation, and enhances residents’ quality of life and facilitates the riverfront economy’s high-quality development.

The total length of the planned Xili Lake eco-corridor is about 15 kilometers, and the 3.7-kilometer-long section under construction starts from an esturay of the Dakan Science Park in the north and the Dasha River in the south.

The section aims to become the city’s first greenway highlighting recreational, cultural and economic significance with natural and ecological protection in place, and work as a multifunctional corridor for slow transportation, natural landscapes and communication.

In terms of design, a proportion of the Guangdong provincial greenway network will ensure its natural environment maintenance, blending the greenway with buildings and facilities, keeping a balance between humans and nature.

The project is expected to improve the cultural and leisurely atmosphere in the University Town and facilitate the economic development in the area.

Additionally, the greenway project plans to work on wildlife protection programs through forest protection and noise control, as the Xili Lake is home to many endangered wild animals.