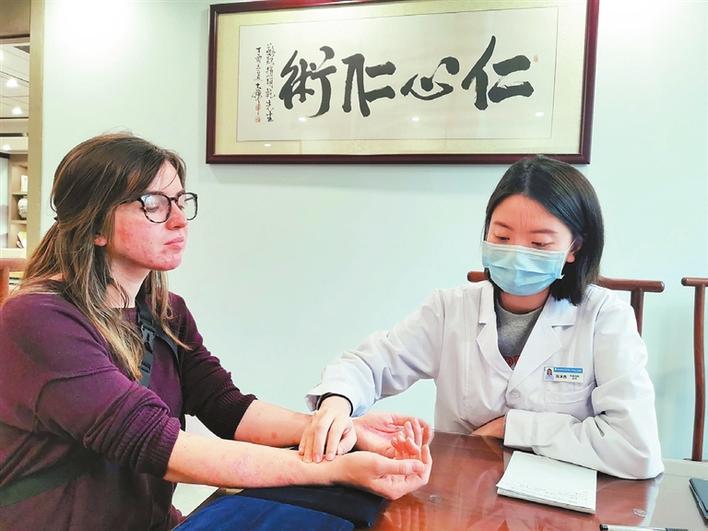 Pawlick (L) poses for a photo with Chen after taking treatment for a few months.

Due to the COVID-19 pandemic, people’s life and work have been seriously affected. Many expats living in Shenzhen are unable to go back to their home countries. Yet the COVID-19 period was a chance for a 25-year-old English teacher, Katy Pawlick from the U.S., to learn about traditional Chinese medicine (TCM).

In an online post from the WeChat account of Chinese Medicine Clinic (医馆界), Pawlick recounted her experience of receiving Chinese medical treatment in the past months in Shenzhen and expressed gratitude that TCM had cured her psoriasis, a disease that U.S. dermatologists claimed she would show symptoms of the rest of her life.

When she arrived in China in January this year, she had a little bit of a rash on her upper arm and acne on her face. This was normal for her as she had psoriasis since she was 10 and it had gotten worse over the winter.

Back in the U.S., Pawlick had grown accustomed to keeping the disease mild and under control with different herbs, supplements, diet and light treatments, though she had never been able to fix it.

But after two months in China, her condition worsened with the rash spreading all over her arms and hands.

“I hide my skin, try not to socialize, and spend lots of money trying to find alternative treatments and to figure out ‘what I did wrong’ to make my skin break out so badly,” Pawlick said in her post.

Then Pawlick had a chance to meet with Chen Moxi, a traditional Chinese medicine practitioner at Shenzhen Mingqianyuan TCM Clinic, in March.

After routine Chinese medicine checks, Pawlick learned she had too much “damp” and “coldness” in her body.

Two months after the initial trial of the TCM, Pawlick recalled, she experienced some diarrhea, the rash on her hands and arms got worse and painful white filled pustules appeared.

“Chen reassured that it was good and the dampness needed to leave my body,” Pawlick said.

She still remembers her last time when the reassurance from Chen helped her stay strong and continue with the treatment.

“White pustules showed up all over my hands and even under my fingernails. I felt scared because I have never had my condition spread to my nails before... I went home and cried from the pain, felt fear that my condition was getting worse, and felt so tired of being sick,” Pawlick recalled.

After the final reaction to the Chinese herbs, Pawlick’s skin began healing. Her skin became smooth and white, and best of all, she felt no pain. She was shocked about how much clearer her arms were.

“In her final visit for a medical check, we are glad to see 90 percent of the rash has disappeared, except some still left on her face. If we were given for one more month, we believe the TCM can solve her problem from the root,” said Chen.

Pawlick went back to the U.S. in July with a big bag of medicine which she drank during her two-week quarantine in the U.S. Though it had a very bad taste, Pawlick felt better after drinking it.

After one month in the U.S., Pawlick said her skin was much better, though not 100 percent perfect.

During the treatment, Pawlick said she was amazed that she was healed without necessarily changing her lifestyle, but just herbs and no cold foods.

“If I stayed in China just a little longer, I could have drank the medicine long enough to be totally clear. But at least I am back home with confidence in myself and my body’s ability to heal,” said Pawlick.

Pawlick feels grateful for the time she spent in China since January, though she sometimes wonders how her life would have been different if she could have found a doctor like Chen when she was 10 years old.