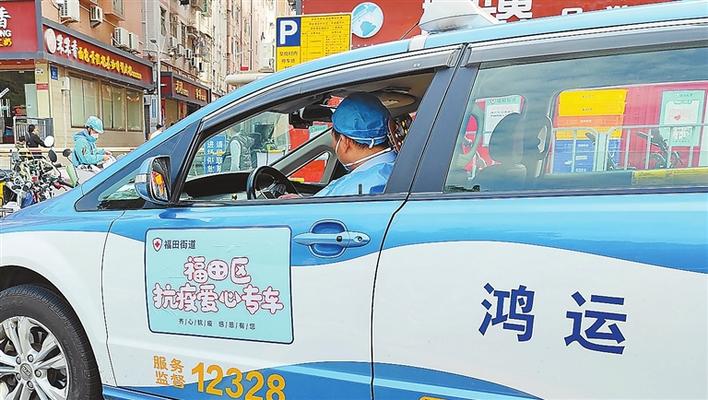 A taxi for emergency use is seen at Shuiweicun housing compound, Futian District yesterday. Sun Yuchen

The move was part of the city’s efforts to strengthen COVID-19 prevention and control.

Yellow and red health code holders are prohibited from using public transportation in the city, and traffic facilities across the city will maintain strict anti-epidemic measures in place, according to Xu Wei, deputy head of the city’s transport bureau.

Xu said that no fewer than four venue codes will be posted on the bus carriage’s side near the door without obstructing safe driving, to facilitate passengers to scan the code. Additional volunteer teams will be dispatched to major bus and Metro stations to provide services and improve passengers’ riding efficiency, according to Xu.

Meanwhile, Shenzhen has made an additional 100 buses available in case of an emergency at key transportation hubs such as railway stations and the airport, which can divert and transfer passengers at any time, according to Xu, who also added that 1,000 taxis are available for emergency use.

The venue code is now available on all the group’s buses, taxis, long-distance buses and various stations, and passengers can scan the code to generate their own personal health code.

According to Zhou Zhicheng, deputy general manager of Shenzhen Metro Group, anti-epidemic measures have been strictly implemented at the city’s Metro stations, and Metro station staffers will offer timely help to the elderly, children, and other passengers who are unable to present the codes required for Metro rides using their mobile phones.

Lin Hancheng, a municipal health official, said that citizens can inquire about the citywide nucleic acid testing locations in real time at the municipal health commission’s WeChat account “szwjwwx,” as well as WeChat miniprograms like “深i您-自主申报,” “社康通” and “健康深圳云平台.”

Lin said that citizens can file an appeal under their health code on the “粤康码” miniprogram if they have doubts about their health codes being red or yellow. Telephone consultations on epidemic prevention and control are also available through the city government’s hotline 12345.