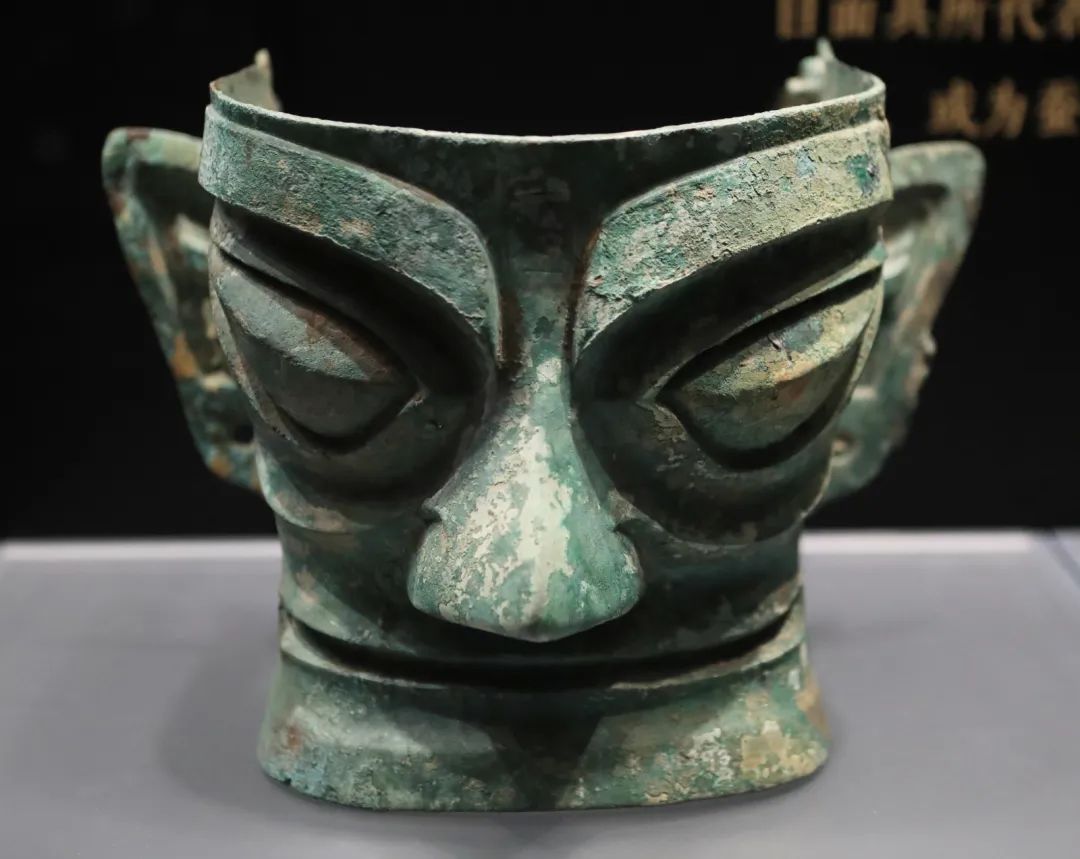 A bronze mask with protruding almond-shaped eyeballs from Sanxingdui is on display at Shenzhen Museum's ancient art division. Photos by Sun Yuchen except otherwise stated

New findings in the mysterious Sanxingdui Ruins in Sichuan Province in June generated excitement, as the question of the sacrificial pits’ age has been solved according to 200 relics’ carbon-dating results. They were from the late Shang Dynasty (1600 B.C.-1046 B.C.) and some artifacts’ design styles demonstrate close communications between the ancient Shu Kingdom and Central China.

The south part of the 12-square-kilometer Sanxingdui Ruins in Guanghan City, around 60 kilometers from Chengdu, includes sacrificial pits No. 1 and 2 excavated in 1986 and six more sacrificial pits discovered between 2020 and 2022. The ruins are believed to be the remnants of the ancient Shu Kingdom dating back more than 3,000 years.

Among thousands of unearthed relics, many are one of a kind, given their distinctive shapes, fine craftsmanship and ingenious designs. Without traces of human remains in the pits, archeologists believe they were sacrificial areas but due to lack of official historical records of Shu Kingdom, how the sacrifices were carried out and what these artifacts were specifically used for are still unknown.

Now a small exhibition interpreting Sanxingdui opened at the Shenzhen Museum’s ancient art division last Friday. Through the relics on loan from Sanxingdui Museum and Jinsha Museum in Sichuan Province and 3D-printed replicas of Sanxingdui’s star items, the exhibition replicates a sacrificial scene based on archeologist Tang Jigen’s research.

Tang, a professor of Southern University of Science and Technology in Shenzhen, has led the excavation and research in Yinxu, the last capital of the Shang Dynasty in modern Anyang, Henan Province, for 25 years. With his expertise in the Shang Dynasty civilization and observation of the Sanxingdui relics, Tang strives to approach the most likely historical truth about sacrifices in Shu Kingdom.

In his research published in a journal last year, he states that some of Sanxingdui’s star relics — the Bronze Standing Figure, the Bronze Sacred Tree and the Vertical-eyed Bronze Mask, as well as several small bronze figures — form a grand sacrificial scene.

“The 1.38-meter-wide Vertical-eyed Bronze Mask and other bronze masks with almond-shaped protruding eyeballs represent the ancient Shu rulers being worshiped in sacrifices because the masks are very big with square holes on the forehead and the temple, which means they might by hung high above the ground, and their bizarre eyes, ears and mouths reflect superpower,” said Tang.

The Vertical-eyed Bronze Mask excavated in 1986 is one of Sanxingdui’s most eye-catching items due to its two protruding cylindrical eyeballs of 16 centimeters in a manner of extreme exaggeration. Its two ears are fully out-stretched and its nose looks like an eagle’s beak. Its mouth is carved as broad as furrows, forming two uplifting curves reaching to the ears, as if it is smiling enigmatically. Most archeologists believe the mask symbolizes Can Cong, the first king of the Shu, whose appearance was described in folk stories in some ancient books.

“Sacrifice is a ritual so participants who carried out sacrifices must possess some postures. The 2.61-meter-tall Bronze Standing Figure has a solemn facial expression and a posture in which it seems to be holding something, perhaps an ivory, so most archeologists believe it must be the officiant in sacrifices facing the Vertical-eyed Bronze Mask. Other shorter bronze figures in various postures were participants in sacrifices, placed behind the Bronze Standing Figure,” said Tang.

Due to its body height, the Bronze Standing Figure excavated in 1986 is regarded by archeologists as the “highest” leader in rituals. This elongated figure appears to be holding something in its two hands, like a shaman performing a religious ceremony. There are several speculations of his identity. Some experts believe he was a king, while others think that he was a priest, or a mixture of deity, wizard and king. 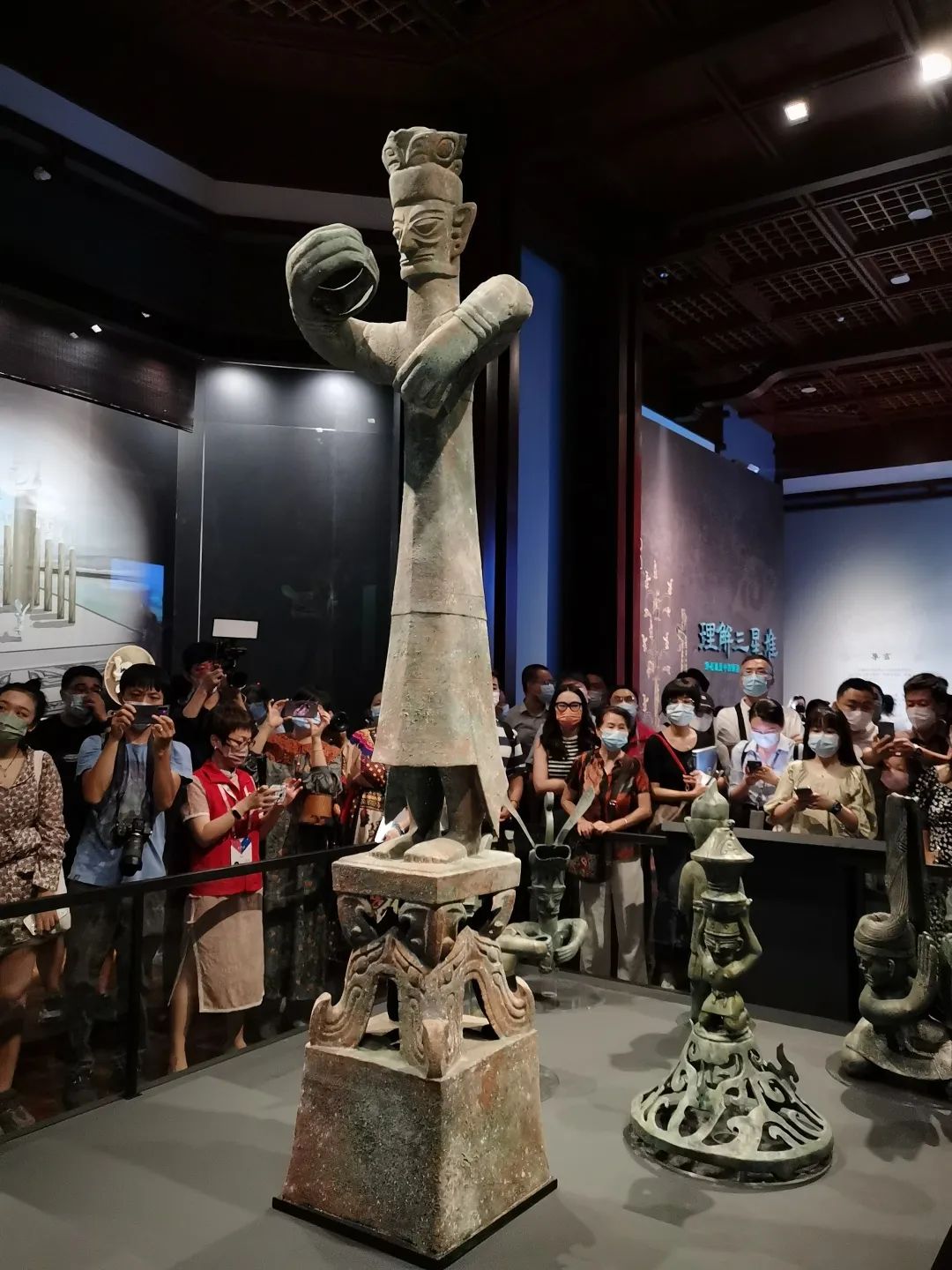 Visitors admire the replica of the Bronze Standing Figure. Photo by Cao Zhen

The Bronze Sacred Tree is another colossal and enigmatic object in Sanxingdui. It took 10 years for archeologists to reassemble the now 3.96-meter-tall bronze tree which was excavated in 1986. Experts believe it reflects the ancient Shu people’s communication with deities or heaven.

“The Bronze Sacred Tree stands between the Vertical-eyed Bronze Mask and the Bronze Standing Figure to form a connection. Hundreds of deliberately broken or burned jade, shells, tiger teeth and ivories were sacrificial items because these were precious objects. The act of destroying and burning them was part of their sacrifices,” said Tang. 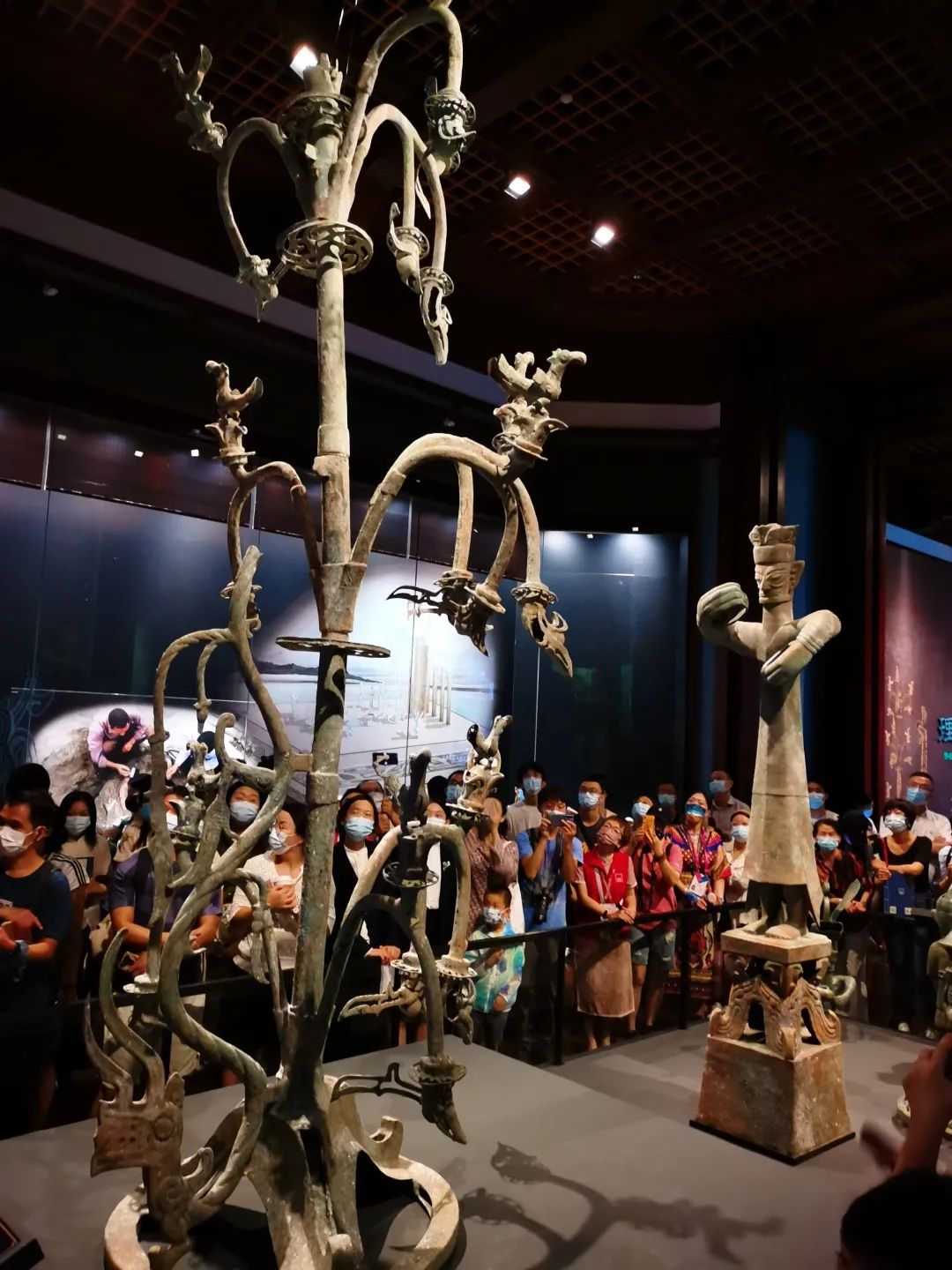 Visitors admire the replica of the Bronze Sacred Tree. Photo by Cao Zhen

“There are also bronze human heads with or without gold masks found in Sanxingdui and I believe they represent tribal chiefs because some have braided hairstyles, but we still couldn’t know their roles and standing places in sacrifices,” Tang added.

Sanxingdui is deemed a limitless archaeological treasure trove with mysteries that still exist even as new discoveries emerge every few years. The pottery, jade, gold and bronze wares unearthed from Sanxingdui also reflect the exquisite craftsmanship and smelting techniques of the people in the ancient Shu Kingdom. These silent relics speak to us and show how much there is to learn and to discover.