Local fans are invited to attend the first live concert of the Shenzhen Symphony Orchestra (SZSO) this Friday after a long hiatus brought by the recent flare-up of the Omicron variant. The concert is also meant to mark the 40th anniversary of Shenzhen Special Zone Daily, a local newspaper born with and recording the history of our city.

Conducted by Liu Ming and featuring flutist Yan Qi, the concert will present a program of classical gems. It will include Beethoven’s “Leonore Overture No. 3, Op. 72b,” Romberg’s “Flute Concerto in B Minor, Op. 30 (17),” and “Symphony No. 3 in F Major, Op. 90” by Brahms. 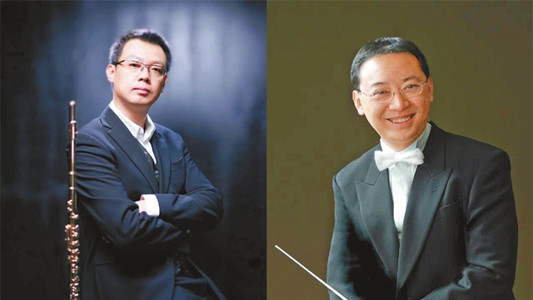 Few composers, no matter how brilliant, have achieved both symphonic and operatic greatness, and Beethoven was no exception. His only opera had a difficult birth, and “Leonore, or The Triumph of Married Love” was retitled “Fidelio” so that it wouldn’t be confused with a previous opera also named after the heroine written by Pierre Gaveaux.

The opera received a new overture each time it was revived during Beethoven’s lifetime. “Leonore Overture No. 3,” which Beethoven revised on the basis of No. 2 that went with the 1805 premiere, was for the 1806 production. A grand symphonic work reflecting the dramatic arc of the opera, the No. 3 overture has earned a life of its own in the concert hall. It’s often performed as a stand-alone piece at concerts. Many opera conductors have also tried to squeeze it into productions, not as an overture, but placed just before the opera’s finale, a practice some attributed to Mahler but may have taken place even earlier.

Bernhard Heinrich Romberg, three years Beethoven’s senior, was a noted cellist and composer of his time. His “Flute Concerto in B Minor” composed in 1810 was his Op. 17, but is often wrongly listed as Op. 30. The three-movement concerto is one of his representative works, giving full exploitation of the technical and expressive possibilities of the flute and foreshadowing the later Romantic style.

Brahms’ music has often been compared with Beethoven’s, as it also combines the serious and the playful, the intellectual and the earthy. The dramatic aspects of his “Symphony No. 3,” the shortest of the four he wrote, are intensified by the compactness of the work. Between the powerful first movement and the similarly charged finale, Brahms inserted two more relaxed movements, trying to prove with music his motto Frei aber froh (“Free but happy”).

Liu, one of the most successful Chinese conductors of his generation, graduated from the University of Cincinnati College-Conservatory of Music with a master’s degree in orchestral conducting. He earned a second master’s in piano performance from the University of Houston Moores School of Music. Director of orchestral activities at the Xinghai Conservatory of Music, Liu is also principal conductor of SZSO. He has conducted numerous orchestras including the Nuremberg Symphony Orchestra and the Ballet de L’Opera de Paris.

Flute professor of Xinghai Conservatory of Music, Yan graduated from the Central Music Conservatory in Beijing and then received a master’s degree from Ecole Normale de Musique in Paris, where he studied with Professor Pierre Yves Artaud.

He has won numerous awards including the second prize at the UFAM International Flute Competition and the first prize at the 10th European Music Contest. He has been placed on the jury of competitions including the Nikolai International Flute Competition. Yan is also active as a concert musician, having performed with the Guangzhou Symphony Orchestra and other ensembles as well as at solo concerts.