Two shows will be staged at Shenzhen Concert Hall this weekend, respectively presenting the works of classical master Mozart and some beloved contemporary pieces from both China and the West.

A night of Mozart Opening the concert will be overture to the three-act comic opera “The Abduction From the Seraglio,” first performed in Vienna in 1782, when Mozart was only 26. While previous operas embraced by audiences at that time were translated works from Italian, this one was the first original German opera to succeed. With joyous and brisk music sometimes exuding an exotic influence from Turkish folk music, the work was widely performed during Mozart’s lifetime throughout German-speaking Europe. Still popular today, the overture is often performed as a standalone piece at concerts.

Mozart’s “Sinfonia Concertante in E-flat Major” for violin, viola, and orchestra is one of his masterpieces. It is both symphonic in character and features violin and viola soloists, in the manner of a double concerto. The range of timbres Mozart created through combinations of various instruments would provide interest enough, even without remarkable passages like the cadenza at the end of the first movement. One great challenge of performing this piece lies in the difficulty to achieve a balance, and not let the violin overshadow the viola. It’s worth anticipating to watch how Tsu and Su, both veteran musicians, will interpret the work.

“The Symphony No. 36 in C Major,” also known as “Linz Symphony,” was written at the height of Mozart’s career in Vienna. It took only four or five days to complete. With clarity, balance and transparency that are the hallmarks of Mozart’s music, it’s a beautiful, joyous and popular piece.

The music director of the China National Opera House and artistic director of Hangzhou Philharmonic Orchestra, Yang is one of the most active conductors in China today. In 2006, he won first place at the Dimitris Mitropoulos International Competition for Orchestral Conducting in Greece.

A violin professor at the Shanghai Conservatory of Music, Tsu has served on the jury of many prestigious competitions, including the Queen Elisabeth Violin Competition and the 15th International Tchaikovsky Violin Competition in Moscow. As a soloist, she has worked with renowned orchestras including the Cologne WDR Sinfonie Orchester and the New York Symphony Orchestra, among others.

Su, a teacher at the China Conservatory of Music in Beijing, is also a sought-after soloist. A graduate from the Royal Academy of Music in London, she won the majority of the viola awards during her study there, and was a prizewinner at the 1997 Lionel Tertis International Viola Competition. From 2000-2004, Su held the post of assistant principal viola of the BBC Philharmonic Orchestra. As a solo violist and chamber musician she has given concerts throughout the world.

Piano duo Helen Sim and Du Ningwu, a couple who met through music during their years at the Juilliard School, will give a concert Saturday night. 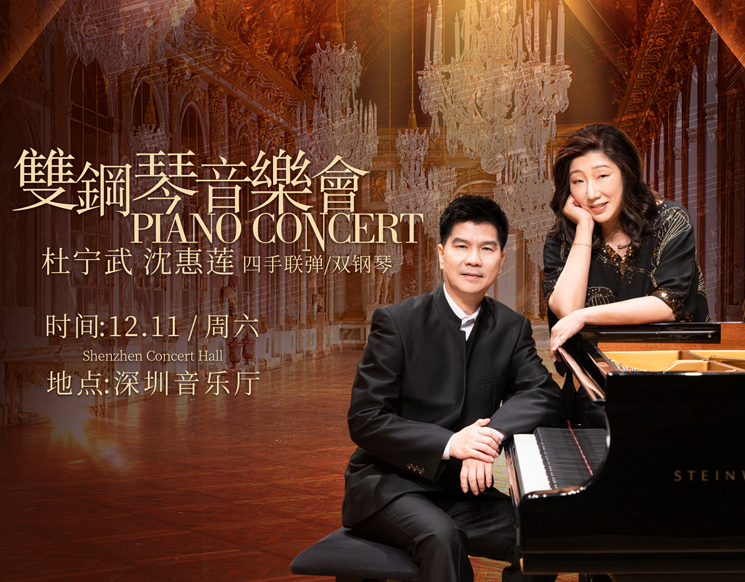 The program will include Beethoven’s “Symphony No. 5 in C Minor” (piano four hands), and also some fan-favorite contemporary pieces. Audience members will hear familiar Chinese tunes like “My Motherland” and “Butterfly Lovers,” as well as Gershwin’s three preludes and Darius’ “Scaramouche Suites.”