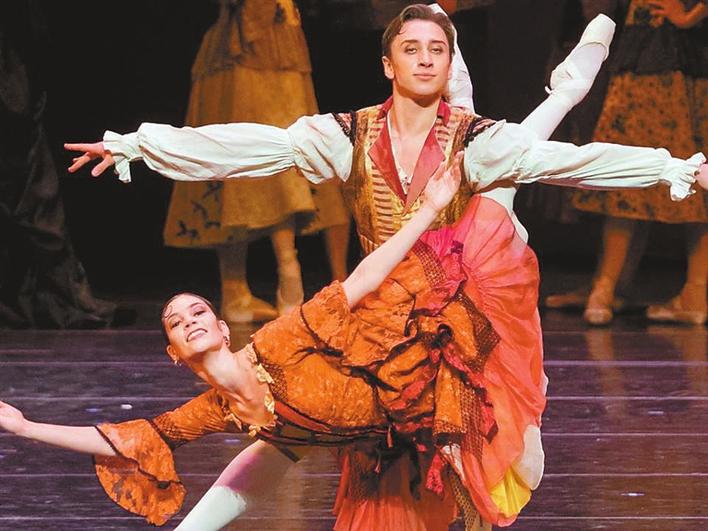 High-definition videos of operas from the past Bregenz Festival and Salzburg Festival in Austria and ballet pieces by the Vienna State Ballet will be screened at Shenzhen Lumière Pavilion in Huaqiangbei from Friday through Nov. 27.

Kasper Holten’s production of “Carmen” on Es Devlin’s extraordinary set was a knockout in 2017 at the Bregenz Festival. A 6-meter-long cigarette glows in a hand of a 24-meter-high tattooed arm, which rises out of a lake. The director also restaged bullfights, fireworks and surreal projections to fascinate you as well.

Performed at the Bregenz Festival in 2013 and 2014, “The Magic Flute” was performed with an impressive stage setting. Three huge statues symbolizing the watch dogs of Sarastro dominate over the action on stage. Hanging bridges in between them offer opportunities for some impressive actions.

In the “Rigoletto” production that premiered at Bregenz Festival in 2019, a huge clown rises from the lake water. The clown’s head and right hand are fully articulated, providing them with a full range of motion. This heightens the emotional impact of the performance, as the head looks down upon the characters on stage and inexorably disintegrates over the course of the opera.

‘The Marriage of Figaro’

“The Marriage of Figaro,” presented by the Chorus of the Vienna State Opera and the Vienna Philharmonic Orchestra, is a spectacular homage to Mozart on his 250th birthday in 2006. It was incontestably the finest presentation of all of his operas and operatic fragments at the Salzburg Festival.

The international press was unanimous in praising the singers’ phenomenal range, heavenly timbre, musical finesse and charismatic stage presence of “La Traviata” performed by the Vienna Philharmonic Orchestra at the 2005 Salzburg Festival.

A superb “Otello” from the Salzburg Festival in 2016 was conducted by Christian Thielemann, who displays a command of Verdian tragedy to match his celebrated sovereignty in Wagner. He and the Staatskapelle Dresden achieved wonders, generating incandescence and precise nuances. As the tragic hero, José Cura deploys his timbre and intensity.

Rudolf Nureyev’s choreography in “Swan Lake” has been in the repertory of the Vienna State Ballet ever since, yet in 2014 it was stylishly revamped for its 50th anniversary revival with attractive new sets and costumes.

Clara who dreams at Christmas of the transformation of the Nutcracker into a man is almost all the time on stage. Nureyev’s choreography deftly alternates between dream and reality. The Vienna State Ballet’s “The Nutcracker” has a lot of classic elegance and humorous scenes.

Based on Miguel de Cervantes’ mock-chivalric romance about a crazy old man who believes himself to be a heroic knight-errant, “Don Quixote” offers a flamboyant fiesta of vibrant Spanish colors and classical Russian dance. Marking the 400th anniversary of Cervantes’ death in 2016, “Don Quixote” is seen in the revised version by Nureyev that the French choreographer Manuel Legris devised for the Vienna State Ballet.